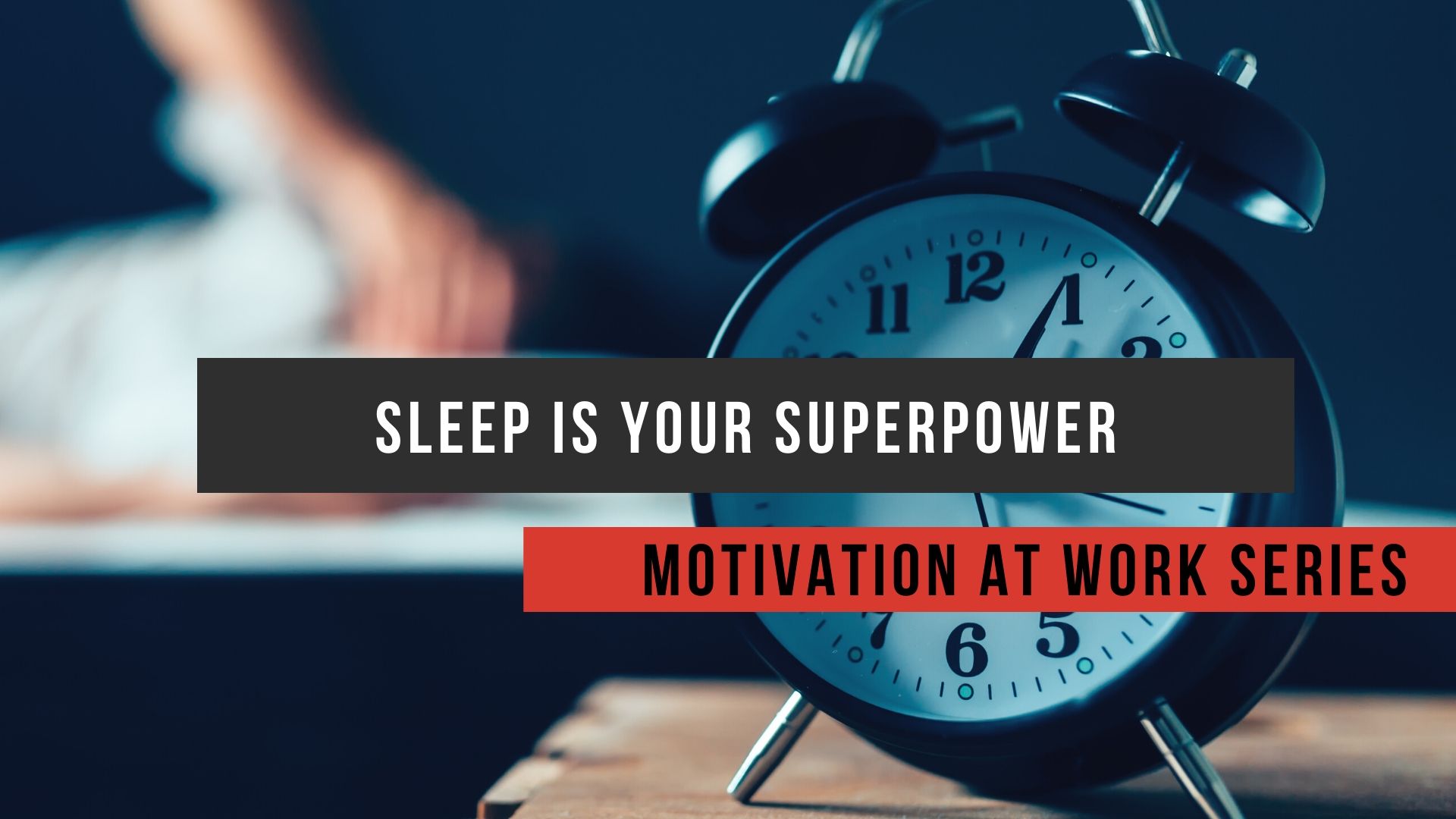 Sleep is your superpower

By Amanda Connolly, Head of Marketing

Once a week here at EC1 Partners one of the team kicks off the day with a short motivational talk. Now, given we have not all become overnight experts in motivational speaking, this usually involves lots of listening to podcasts and tedtalk browsing for inspiration.   I chose sleep as my ‘topic du jour’….it is perhaps not the most obvious choice of motivational subject – but I learnt just how important sleep is, to your mental and your physical wellbeing. My source of inspiration was a chap called Matt Walker, who seems to be somewhat of a ‘sleep wizard’ – he even has his own ‘sleep research centre’.   Since this day, I’ve been religiously enjoying a full 8 hours of sleep every night (well most nights)…maybe these facts from Matt’s “Sleep is your superpower” tedtalk will change you too.

Some shocking facts about sleep

“Men who sleep 5 hours a night have significantly smaller testicles than those who sleep 7 hours or more”.

“Men who routinely sleep 4-5 hours a night will have the level of testosterone of a man 10 years their senior”.

"…. With equivalent impairments in female reproductive health caused by lack of sleep"

The importance of sleep to your memory

It’s long been known that you need sleep after learning new memories in order to ‘save down’ those memories but it’s also recently been discovered that you need sleep in order to prepare you for new memories.  He compared two groups – one who had had the full 8 hours of sleep and a ‘sleep deprivation’ group – a group that had drawn the definite short straw, kept awake all night with no naps or caffeine.     Using an MRI scanner (Matt is a serious sleep scientist) he tested his groups with learning new facts whilst taking snapshots of brain activity.

The results?  The sleep deprived group experienced a 40% deficit in the ability of the brain to make new memories.

Pretty shocking stuff. This is the difference between acing an exam and failing it completely.

It has to do with the hippocampus, the informational inbox of the brain, and in the group that had plenty of sleep there was lots of activity.  By stark contrast, in the sleep deprived group, the lab didn’t see any activity at all.   The ‘inbox’ had shut down completely and was simply rejecting all incoming information.

The quality of your sleep gets worse naturally as you age and this disruption of sleep further contributes to memory and cognitive denigration,creating a vicious circle of decline.

The use of sleeping pills does not help, as the quality of sleep you get is significantly inferior to that which occurs naturally.

So, what is the answer?    Matt and his team have made some significant findings in experiments (albeit on young adults) – finding that a direct brain stimulation was effective in amplifying brain waves and therefore improving sleep quality, doubling memory capacity.      This is an exciting discovery with enormous potential both for healthy people, for mitigating the effects of ageing and as a promising tool for improving memory inpatients suffering from conditions such as Alzheimer’s.

A global sleep experiment of over 1.6 bn people

Daylight savings time is effectively a mass global sleep experiment across 70 countries twice a year.  In Spring, when we lose 1 hour of sleep, there is a 24% increase in heart attacks the following day.  This compares to Autumn, when we gain an hour and there is a 24% decrease in the number heart attacks.   A similar effect can be seen across other areas– from car crashes to suicide rates, sobering statistics which further reinforce the importance of getting a good night’s sleep.

Your immune system is full of natural killer cells, a type of white blood cell – and, trust me, you want a lot of these.  They are your own personal army; destroying cancer and viral infections.

There are significant links between short sleep duration and numerous forms of cancer – including bowel, prostate and breast cancer.

In subjects restricted to just 4 hours sleep in 1 night,there was a 70% drop in natural killer cell activity.

He also found that lack of sleep erodes your DNA code, with 711 genes distorted because of lack of sleep….with immune system genes switching off and increased activity among those genes that cause stress, tumours and inflammation.

How to improve your sleep

Aside from the obvious ‘avoid alcohol and caffeine’ advice, Matt is a keen advocate of consistency. Ensure you go to bed at the same time and wake up at the same time –whether it’s a weekday or the weekend.

Associate your room with sleep

If you are having problems, get up and do something else – it is beneficial to train your brain to associate your bedroom with sleep.

Put your devices down

There is also lots of evidence that the bluelight which mobiles and other electronic devices emit interferes with sleep and circadian rhythms, so put away your devices in the evening hours for a better chance of a good night’s sleep.

Sleep is not an optional lifestyle choice, it’s a biological necessity with clear benefits for memory, your immune system, in reducing your likelihood of getting all types of cancer and much more.

It’s a vital foundation for a healthy life and, as Matt described, it’s ‘mother nature’s best effort yet at immortality’.